Paladin Family Sends Sydney
on a Trip of a Lifetime

Canada’s most trusted Security Company achieved its goal of raising funds to make four-year-old Sydney’s wish to meet her favourite Ice Queen come true. The campaign to support Sydney, who is battling Acute Lymphoblastic Leukemia, was supported by our Paladin team from coast to coast. With 24 branches across Canada, each of them designed their own creative fundraisers to ensure this corporate campaign was successful. These are just a few of the creative and selfless fundraisers that our Paladin Family put together to ensure Sydney and her family are sent on their trip of a lifetime. We’re very proud of each individual and branch who contributed to this cause! 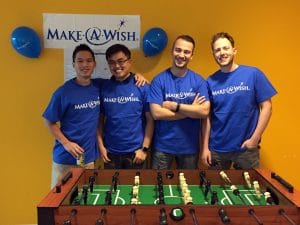 Our Head Office held its first annual, single-elimination Make-A-Wish® Tournament for the month of November. The championship game was marked by a BBQ fundraiser along with a few other activities, they can all be read here.

The feature of the night was Pie-Your-Boss! Separate from the raffle, employees could purchase tickets to mush a pie plate full of whipped cream in the face of a manager of their choice. Richard Thomas was a fan favourite to pie, as he received 2 out of the 3 tickets drawn. Robert Bento, being the team player he is, also participated and was pied in the face. 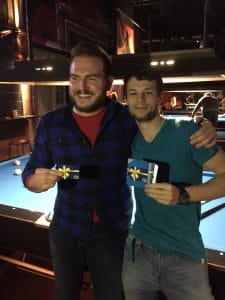 Client Service Manager, Hilario Braga and Field Supervisor, Chris Nalon raised funds for the Make-A-Wish® charity through a 50/50 raffle. Wrapping up the holiday season, our Kingston Branch hosted their annual Pool Night, and at the end of the night, three Best buy gift cards were drawn and Director, Robert Bento concluded with a warm thank you and holiday wishes to all the staff.

Halifax’s Regional Healthcare Manager, Tom Taggart challenged all Nova Scotia and PEI Officers to raise money. The challenge: raise $100.00 to shave Tom’s beard, and raise $200.00 dollars to shave Tom’s head. Without missing a beat, the Mobile team raised the money in less than a week!

On December 13, everyone was invited to the office to witness Tom’s beard get shaved one strip at a time. The branch’s Mobile team took their turns with the razor, as they chopped off Tom’s hair and beard.