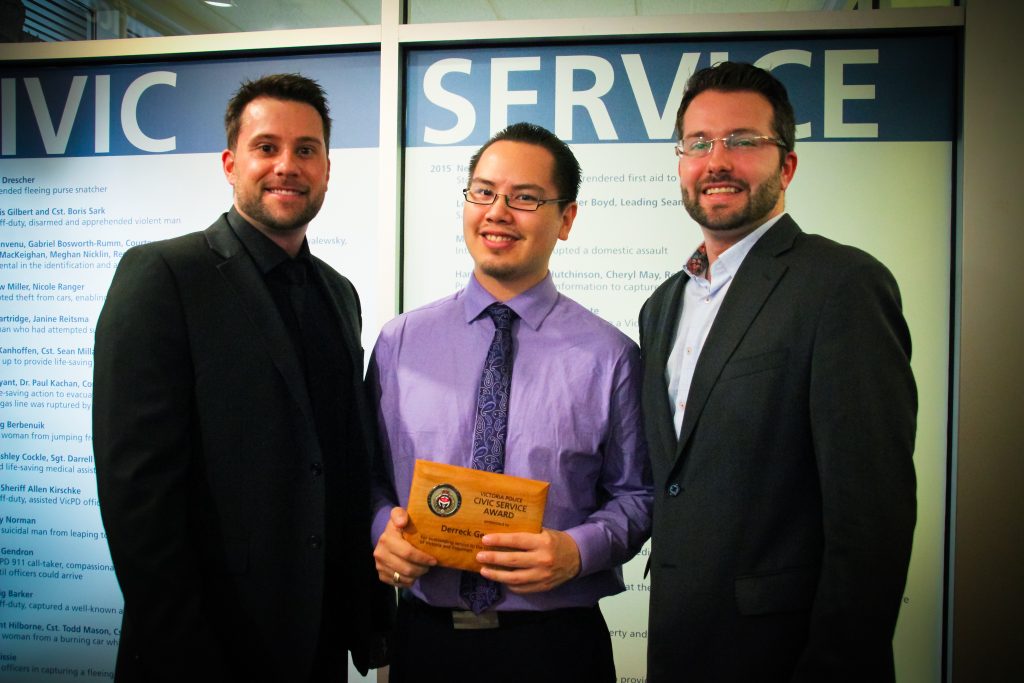 Derreck George, a Paladin Security Officer in Victoria, was recently acknowledged by the Victoria Police Department.

At the end of January, Derreck was awarded with the Victoria Police Department’s Civic Service Award for his efforts in stopping an armed thief. The Award was created as a way to recognize community members and Victoria Police Officers who have stepped up and done the right thing in challenging situations.

Derreck stepped up when he was on duty at a downtown Victoria site. He was called to the scene when the manager of a store was attempting to stop a shoplifter. As the manager intervened, the shoplifter began to suddenly attack. Derreck leaped into action and intervened the incident, ending a likely assault. Moments later, the shoplifter became combative again. Fortunately, a passerby further assisted the incident, allowing Derreck and the manager to gain control. The suspect was taken into on-site custody where he was held until the police arrived.

The Victoria Police Department held an awards ceremony on January 18, 2017 to acknowledge Derreck, the manager, and also the passerby for their heroic efforts. Acting Chief Constable Del Manak shared at the ceremony:

“These ceremonies for the Victoria Police Department Service Awards are very special to me and our staff. They are special because these ceremonies allow us the chance to pause and recognize people who have made a conscience decision to make our communities better. In policing, we often say that we cannot do it alone. We would like nothing more than to be everywhere, at every moment, ready to help each citizen who is in need. However, we all know that that is not possible. We do know that citizens, like the ones receiving their awards today, can help us make a difference.

It takes a collective effort to keep our community healthy and safe. The award recipients today have been nominated for making a decision to act in the interest of their communities. They stepped up and I thank you all for doing the right thing. On behalf of all the staff here at the Victoria Police Department, I want to extend my sincere thanks and appreciation for your commitment to your communities.”

Derrek George has been with Paladin for two years. His acknowledgment defines the Paladin difference and his continued success is praised from coast to coast.