Rob Clarmont is a Paladin Legend 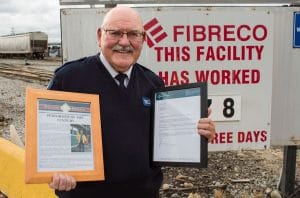 This past October, 2017 marked Rob’s 30 year anniversary with Paladin. As one of the company’s five original employees, Rob started in 1987 and his tenure is only beaten by President & CEO, Ashley Cooper, who purchased Paladin in 1986. At the time Paladin only had one contract – Fibreco, a wood fibre export terminal in North Vancouver, BC – which we proudly hold to this day.

What makes Rob’s tenure especially remarkable is the fact that, 30 years and a variety of positions later, he is still working at Fibreco, currently as Site Supervisor. He’s made continuous improvements to the site over the years, including single-handedly creating the post orders and a comprehensive training program which includes quizzes to ensure that anyone coming to work at Fibreco will be as thoroughly trained and knowledgeable as he is.

We are so fortunate to have Robert on the Paladin team. To achieve 30 years with the same organization is something that is so rare in this day and age. The Paladin Family has such a strong culture and Robert is the epitome of how this culture has been strengthened over time. Although I have only known Robert for 10 percent of his Paladin career, I am a better Paladin employee for the time I have spent with him!

Rob first started working in security in 1978, in Whitehorse, Yukon, when he was offered a position with Parks Canada. “I was told I’d get to wear a uniform and greet people, so I said ‘why not? I’ll try it’.” After moving to Vancouver, Rob saw Paladin’s ad seeking Security Officers for Fibreco. Even in the early days, Paladin maintained stringent hiring practices, and so he underwent several interviews at the site, and then again at Ashley’s house, as this was before Paladin had an office.

Rob remembers Paladin’s initial expansion as he was instrumental in the growth, “Expansion really started in 1990 when we got a call saying we had gotten the contract with the Vancouver Law Courts and needed to hire 40 people in a hurry.” Rob had a mobile position at the time, driving Paladin’s first patrol vehicle – a silver Chevy Sprint.

“I drove mobile for quite a while, and was also doing training. It was challenging. I’d drive to sites and set them up, and determine what kind of coverage we needed, then report back to Ashley. When we were first growing, I was Ashley’s right-hand-man. It worked out really well, he could depend on me to get the job done. That’s the way I was trained.”

In all his years with Paladin, Rob has held a variety of positions but never had a desire to move into an office job. “I thought about it for a while, but I didn’t think I’d be a good fit in an office. I’m more of a hands-on worker and I prefer to work training people at the site.”

Rob’s advice to those just starting their security careers? “This is a customer-oriented business and it’s all about how you deal with people. Always strive to do the best you can, and always go with the attitude, ‘yes I can’. Go with that attitude and you’ll go a long way. And don’t be afraid to go out of your way to do a little extra because it’ll pay off. Always learn, and respond, and grow from your mistakes. That’s how I’ve come to be here for 30 years, by doing the hard work.”

Robert has been a part of the Paladin Family for over 30 years and has seen so much change in our company during his time. We have had a lot of laughs over the years, but when something needed to get done, I could always count on Robert to do it and to do it well. I am really proud to call Robert my friend and so thankful that he chose Paladin as his career. His integrity is beyond reproach and he is dedicated and hard working as they come. Thank for all of the great work over the years, Robert! Now can we convince you to stay for another 30 years?