Our Red Deer team is proud to be involved in this year's Agri-Trade Equipment Expo held from November 8th to November 11th.

The Agri-Trade Equipment Expo is a joint venture put on by Westerner Park, Red Deer and the District Chamber of Commerce. This year's event saw 33, 381 total attendees through its doors with the show consisting of 470 exhibits. Agri-Trade is the first show of a new planting season showcasing the newest products and services inclining producers to discover new items for purchase at the show.

The four-day trade show was spread out over 185,000 square feet of indoor tradeshow and exhibit space, as well as 85,000 square feet of outdoor exhibits. This event is considered to be one of the best Farm Equipment Shows to do business in North America, with "Millions of dollars in business transactions take place during the show," said Show Manager, Dave Fiddler. 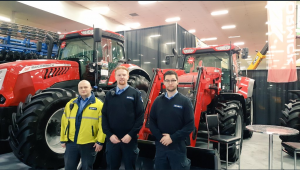 With the event being the largest Agri-Trade event in Western Canada, the show boasts a 150-200 million dollars of revenue for the City of Red Deer.

This year marked the event's first where Security was actively involved in its roll out and the event coordinators relied on Paladin for security assessments and reviews. The 2017 Agri-Trade successfully concluded with no serious incidents or issues, leaving our clients impressed with our Officers' service and dedication to the event's contractors and exhibitors.