Victoria Participates in
Coldest Night of the Year Walk 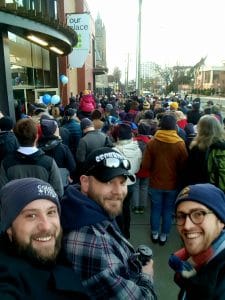 On February 24th, members of Paladin’s Victoria branch took part in the Coldest Night of the Year, a winter fundraiser where supporters across Canada walk to benefit the homeless. The walk in Victoria was organized by Our Place Society, an inner-city community centre serving Victoria’s working poor, impoverished elderly, mentally and physically challenged, addicted and the homeless.

Our Place’s Grant McKenzie explains the recent state of Victoria’s weather and its impact on their operations, “We’ve had emergency weather now for 13 nights in a row. It’s been that cold where we’ve had to open additional shelters”.

The movement began in Ontario in 2011, and has raised over $16.5 million to date. This year, 121 Canadian communities participated, with a fundraising goal of $4.5 million.

A sincere thank you to all who attended!