Insights from Our Team: Remembrance Day 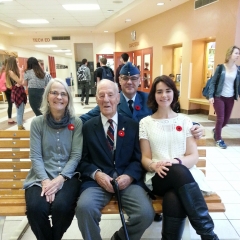 How long have you been with Paladin Security?
I was hired and trained in June, 2016. I delayed my actual start date to allow me to complete a full time military contract this summer. I have been actively working for the company for three months now.

What is the organization you are involved in outside of Paladin?
I am a Canadian Armed Forces Officer with the Cadet Instructors Cadre (CIC). I hold the position of Training Officer with the 507 Flight Lieutenant McLean Royal Canadian Air Cadet Squadron. Our squadron parades on base at the Land Force Atlantic Training Center Aldershot (Camp Aldershot) in Kentville, NS. Officers of the Cadet Instructors Cadre are members of the Reserve Force working as part of the Cadet Organizations Administration and Training Service. They are asked to commit a minimum of six hours per week and one weekend per month of duty. Cadet Instructors may work at any of the 1100 Sea or Army Cadet Corps and Air Cadet Squadrons in Canada, or one of the 22 Cadet Summer Training Centers. Cadet corps and squadrons parade in schools, community centers, armouries, bases and churches. The majority of the cadet summer training centers are located at Forces Bases, where staff and cadets train for periods up to 7 weeks during the summer months.

How does working in security support you in your outside organization?
For me working for Paladin in the security field provides me a way to use the valuable skills that I have acquired through my Forces training and the excellent training supplied by Paladin to serve two ways as a liaison between both my civic and civilian employers and my home town community, and as a mentor to future leaders. I carry a lot of pride in each respect.

This pride I feel is illustrated through something my father and my uncle have said to me in the past: “it is important that young people see you as an example in uniform, regardless of what you do or who you work for. You must set the standard so they understand how much there is to be gained through being a responsible, working citizen, a moral person and a leader who places the highest value in your contribution to our local community.”

What motivates you in your career goals?
Finding self-value through service, having my service seen as valued and beneficial in the eyes of my clients, and having goals to strive for that result in tangible results. These results having their basis in helping those with who I have the pleasure to work for and work with.

What does Remembrance Day mean to you?
To me, Remembrance Day serves as a heartfelt reminder of the sacrifices that so many brave souls have made in the past to gain and keep the solidarity and freedom we enjoy today and will enjoy into the future as citizens of this wonderful and incredible nation. I also have family ties that were directly linked to the global conflict that contributed to the importance of remembrance. My Father served with RCAF 162 Squadron as a bombardier/navigator aboard PBY Canso flying boats doing maritime patrol (anti-submarine duty) out of RAF Reykjavik, Iceland during the Second World War. My Uncle, deceased, who introduced my Father to my Mother before his death in World War II, was part of an 8 man crew that was out on a patrol flight and preparing for landing at the Reykjavik airfield when they crashed into SveifluhaIs mountain 15 miles South of Reykjavik on 19th Dec 1944. (weather at the time was cloudy). All personnel died. They are buried at the commonwealth gravesite in Reykjavik, Iceland. My Father-in-Law, now deceased, served overseas in the Second World War with the North Shore New Brunswick Regiment and was wounded in Holland near the end of the war. He returned to duty later on and remained overseas with the occupation forces in Germany after the war.

If you could give advice to someone following in your footsteps today, what would it be?
Remember the patient, remember your client, put safety first and always take pride in excellence. You owe it not just to your family, community and country, you owe it to yourself!

Eric Strokes, Healthcare Security Officer on Paladin Profiles How to Prepare a Vehicle for Driving Under Winter Conditions