The Paladin Family is honoured to have been able to send Cole, a ten-year-old boy from Prince Edward Island on a trip of a lifetime to WrestleMania 34! 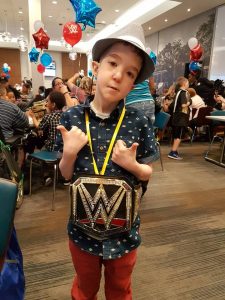 Cole has been diagnosed the rare and little known 14Q-deletion syndrome. In early April, 2018, he had his wish to attend WrestleMania 34 in New Orleans granted by the generous support of our Paladin branches from coast to coast through the Make-A-Wish® foundation.

As Cole does not communicate through words, he conveyed his wish through demonstrating a wrestling match with his cherished action figures. An avid wrestling fan, Cole keeps up to date with matches on TV, where he follows his favourite wrestling heroes like John Cena.

Upon hearing that Paladin was going to adopt Cole's wish, his mother says,

This is an amazing gift you have given. Not only to charities, but to the families who get to experience the wish. When you have a child who is sick, it doesn't only affect them, but the whole family. I know he will be overjoyed with excitement and the memories of this wish® trip will last forever!

Cole is the second child Paladin has sponsored through the Make-A-Wish® foundation in the past year, after we helped Sydney to Disneyland to meet Elsa from Frozen in late December,2017.