THE DIFFERENCE BETWEEN A SECURITY OFFICER AND POLICE OFFICER 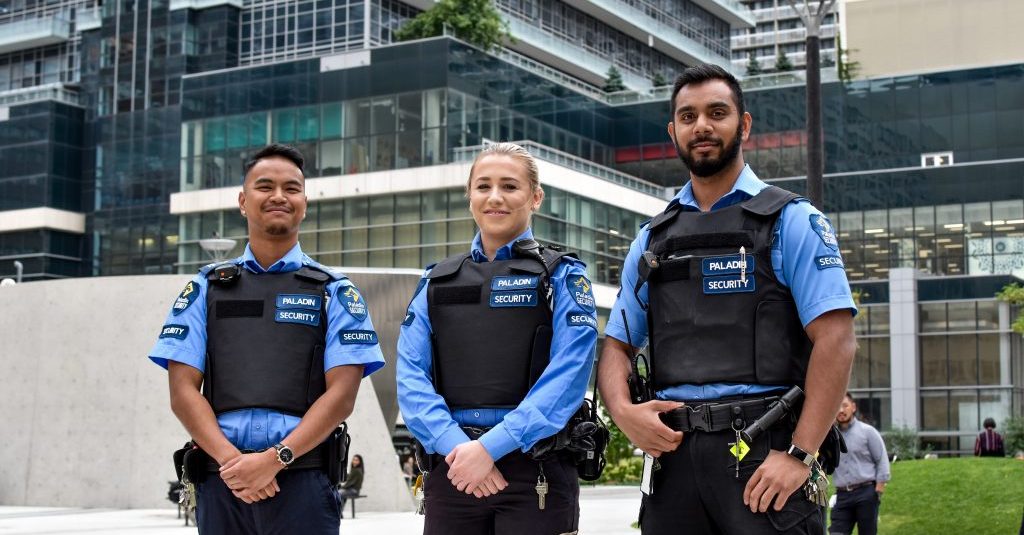 Interested in a career in security or law enforcement but aren’t exactly sure what the is difference between the two? Because of the uniform and equipment carried, security officers often get mistaken for police officers. But there are a lot of differences between private security officers hired by companies and public police officers who represent a city or municipality. In general terms, security professionals protect private property while the police enforce the law.

But believe it or not, while the two roles differ greatly, there are also a lot of similarities, which we will explore in detail below.

This blog will cover:

The Role of a Security Officer

A job in security can turn into a lifelong, gratifying career. It can also act as a steppingstone to a career in law enforcement in a role such as a police officer.

The first thing to remember is that security is not law enforcement, so security officers, or guards, are not technically able to enforce it. Security officers represent a private business and are responsible for keeping the property and people inside safe from a myriad of issues. They are there to enforce policies and to respond to criminal activity. They are also able to question without probable cause when working to protect private property, such as a mall, hospital, or post-secondary education facility.

But the role of a security officer goes well beyond simply protecting property and manning events; many times, security professionals perform life-saving actions and become heroes of our communities. A number of our officers at Paladin have been honoured with the Canadian Security Lifesavers Award for doing exactly that, whether it be resuscitating someone, preventing a suicide, or assisting with critical incident first aid.

Security officer’s also have a role in educating the public. When it comes to hot button topics, they are there to help keep peace and order while also ensuring the public understands why certain measures are being put in place.

Depending on the province you are working in, security officers or guards need to be fully licensed and undergo mandatory basic training. At Paladin we pay for all licensing costs and support our people with their required preparatory training. Check out our blog on security licenses for more information.

As for uniforms, these also fall under provincial legislation and each province has their own rules and requirements which must be followed when working as a security professional in order to ensure ease of identification and professional standards are upheld.

The Role of a Police Officer

It’s common for police officers to have a background in security, as it helps prepare future candidates for the role. As mentioned, police enforce the law, but there is more to their role than that. They also deal with crime prevention, assist victims of crime, conduct investigations, maintain public order, and take part in emergency response.  Police also have a duty to the community they serve. That means they work with residents to prevent crime and address safety.  Oftentimes, they also host public information sessions with young people or seniors.

When it comes to uniforms and equipment, police officers have a standard uniform that everyone on patrol would wear. It includes a hat, button-down shirt, and pants with stripe down the side to help be distinguishable. All law enforcement pants include a stripe, whereas Security Officers cannot have a stripe on their legs.

With specialized training, both security and police officers have the authority to carry role specific PPE such as puncture resistant gloves, handcuffs, and batons, however, only Police are able to carry the following:

Some cities and municipalities also have their officers wearing body cameras which is also something prevalent within the security industry.

While Police and Security, in general, have a lot in common, we feel our approach at Paladin takes the commonalities a step further, and therefore increases the similarities we have with policing. For example, both Paladin and the police have a rigorous selection process with extensive front-end and ongoing training. Both also subscribe to ongoing, never-ending improvement and embedded process evolution in their day-to-day operational execution.

Just like in the police service, culture is a big part of Paladin. It ultimately defines our and their organizational priorities. Part of that culture includes leading with empathy, which is taught on day one of training at both Paladin and within many police forces across the country. Leading with empathy allows you to understand where the other person is coming from and how you can best help them. Finally, one of the core similarities is the development and promotion from within. You see it firsthand with police how someone starts as a beat officer and works their way up to Detective, Sergeant, or beyond. At Paladin, we approach career progression in the same way. While many applicants start on the front line as a security officer many end up becoming a supervisor, manager, or even an executive. In fact, many of our current leadership team members started their careers with Paladin in entry level roles so you know we practice what we preach. We believe in equipping our people with best-in-class training and knowledge, which helps nurture and grow careers. Read more about our promotion-from-within philosophy here.

Training at each security company varies widely. At Paladin, it’s not something we take lightly. Our advanced safety and security-based course curriculum are unmatched anywhere else in the industry. Every officer receives a minimum of 40 hours of training, but that increases based on the site you work at and the complexity of the program you work within. We also facilitate and encourage ongoing training to ensure continues learning and improvement of our people.

When it comes to training to be a police officer, that process can take six months and includes everything from note-taking and ethical values to weapons handling and basic military training.

For more information on the initial training involved in becoming a police officer, check out our blog on ‘How Hard is the Police Academy’ and ‘Physical Fitness Requirements’.

One of the biggest differentiators between security and police is the qualifications needed to be able to apply. Here are the basic requirements for becoming a security officer:

Meanwhile, the following list of application requirements applies to most police agencies:

For more information, read our blog on ‘How to Become a Police Officer’.

How Security Officers help the Police

Security Officers play a large role in helping police. Serving almost as a second set of eyes and ears for law enforcement, security helps reduce crimes and keeps order. While a security officer’s main role is to serve the client, they also help keep the community safe, which in turn, is an asset for police. In essence, an officer or guard will be a preventive presence as well as a professional witness, utilizing ears and eyes in the event of a situation that requires police involvement.

LEARN MORE: How to Become a Security Guard.

Getting into a Career in Security

If you’re looking for meaningful work and interested in joining the security industry, Paladin is the place for you. A career as a security officer can be very rewarding and lead to numerous opportunities. It can also provide you with the necessary experience to help you qualify for a career in law enforcement. Be sure to listen to Episode 2 of The Difference Makers | A Paladin Security Podcast to find out more.

For openings with Paladin, visit our careers page.